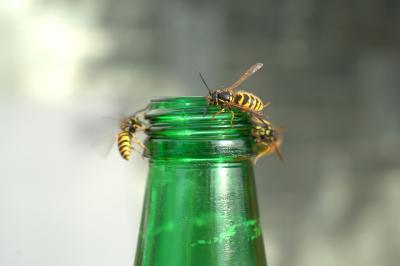 I was recently doing some number crunching to see how things had developed during lockdown and I came across an astonishing fact – our business has seen a 23% increase in callouts relating to wasps! Between 1 July and mid-September in 2019 we had 271 callouts for wasp nests and, for the same period in 2020, we have had 334 callouts.

Statistics tell us a lot. In a world dominated by soundbites, a good, solid statistic can be hard to argue against. It is certainly hard to dispute a 23% increase. Even considering other factors that is still a major increase in one year, and it seems it is being replicated all over the country.

Every year newspapers report the problem of wasps at this time of year. In 2016, I gave some quotes to a journalist about this subject and they spread like wildfire throughout the news media. I still give a wry smile at the headline in The Sun newspaper – “Ouch, Achstung!“ In fact, a similar thing happened this year when an interview I gave was then reported in Metro, The Daily Star, Daily Mail, Daily Express, The Sun and Scottish Sun. Perhaps most pleasingly, and it is worth clicking on the link just to see the image they used, I was also quoted in the New York Post.

The reason we have had such a problem with wasps this year is that climatically we have had the perfect storm – a very dry April and an Indian Summer.

You may remember that in April, at the start of lockdown, we had unseasonably wonderful weather. It was very warm and dry, no April showers. Since most of us could not leave our homes for more than an hour, this was a very welcome respite.

For the wasps, it meant large numbers of their nests were not destroyed. Winter has always been the environment’s natural pest controller. It could be said, however, that we haven’t had a truly harsh winter since 1978/9.

With so many nests surviving the winter, wasp populations exploded during the summer. This then becomes a problem at this time of year because the queen stops laying eggs and the worker wasps are suddenly unemployed. Without anything to do, they are free to search more widely and one of the things they find are orchards and gardens full of fermenting fruit. Jobless wasps plus fermenting fruit equals ‘drunken’ wasps.

This is when the second part of the ‘perfect storm’ comes into play. With an Indian Summer, we are more inclined to be outside having barbecues. This year, that temptation is even greater because we are still under various COVID-19 restrictions. We are therefore outside with tempting treats from the barbecue, and the wasps have lost their inhibitions because of the fermenting fruit. Add to that the fact there are more wasps than normal, and it is hardly surprising wasp attacks are commonplace in the news.

What to do if you have a wasp problem

The average nest contains around 10,000 wasps. If you think you have a problem, my advice is do not try to deal with it yourself. I wouldn’t go near an active wasp nest without the right personal protective equipment (PPE) because it is too great a risk.

Unlike bees, wasps can continue to sting without dying and, perhaps more worryingly, they can signal to others. Their natural instinct is to protect the nest and so, if you are trying to deal with one annoying wasp as you sip a cold glass of white wine, it can very soon become multiple, angry wasps.

At one end of the scale, wasps can be a nuisance and you might get a painful sting. At the other end, it can result in anaphylactic shock, if the stung person is allergic. Professional pest controllers have the protection, experience and training to safely remove a wasp problem without endangering themselves or other people.

Image by Andreas Lischka from Pixabay