What do you know about wasps? 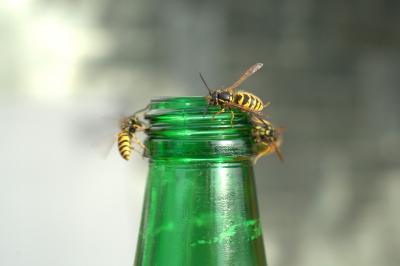 We’ve just posted two stories about wasps on our social media sites and what is interesting is that, while one conforms to our stereotypical image of the wasp, the second article completely goes against our jaundiced view of this insect. It made me think, what do we really know about wasps?

The BBC last week reported that New Zealand was introducing two insects from Europe – the hover fly and wasp-nest beetle – to help them deal with their wasp problem. New Zealand has some of the highest numbers of wasps in the world - their “honey dew-covered bean trees [have] the highest density of wasps in the world – with as many as 30 wasp nests per hectare.” This is decimating the local insect population and costing the economy $133 million a year because of damage and management costs. What makes this remarkable is that the German wasp (Vespula Germanica) was only introduced into New Zealand in the 1940s (wasp queens were overwintering in shipped aircraft parts) and the common wasp only arrived in the 1970s. Both were accidental introductions. The speed at which they have taken over just shows how adaptable these insects are to exploiting an environment.

This story essentially conforms to our traditional view of the wasp – essentially a nuisance pest that offers no value to the environment.

However, the second story goes completely against this view. At Blickling Hall in Norfolk, the National Trust is introducing wasps to help them deal with the problem of clothes moths. These aren’t yellowjackets – the ones we commonly call ‘wasps’. Instead, they are tiny parasitic wasps, called Trichogramma evanescens. They are only 0.5 mm long and they lay their eggs inside the eggs of clothes moths. Therefore, instead of a moth larva hatching from the egg, a tiny wasp is produced that is entirely benign.

Blickling Hall, thought to be the birthplace of Anne Boleyn, like all National Trust properties, has noticed a serious problem with pests and moulds during lockdowns. The hall is home to several important works of art that are particularly susceptible to damage by the larvae of clothes moths. These include a tapestry that was a gift from Russia’s Catherine the Great, known as the Peter the Great tapestry, and a counterpane from Queen Anne's throne canopy.

Certainly, the National Trust is not considering these wasps to be a nuisance with no value. In New Zealand as well, while these non-native species of social wasp are a problem, the multiple types of wasps that evolved naturally in the country are not considered a nuisance.

The problem is, when we commonly use the word wasp, we are often just thinking about yellowjackets. There are huge numbers of wasps we never consider to be wasps and their value to the planet is very under appreciated.

The Victorian physician Edward Latham Ormerod, author of ‘The Natural History of British Social Wasps’ (1868), said, “we do not readily appreciate the indirect benefits which we derived from wasps.” In fact, there are over 200,000 different types of wasps and around 7,000 where we live. As a country, we only have two ‘problem’ varieties – the Common and German wasps – and these only really become a problem when we interact with them. The typical example is the late summer picnic.

Globally, the number of ‘problem’ wasps is, in fact, tiny. Really tiny. Most wasps are extremely beneficial to us and are, as in the case of Trichogramma evanescens, of the parasitoid variety. In fact, they often don’t have a sting and look like tiny flies. Because they are parasitic, however, they are brilliant at keeping other pest insects under control. It has been estimated a single wasp colony in a back garden can remove as many as 250,000 aphids in a season.

Wasps are also great pollinators. While they are primarily hunters they do also land on plants and, because they aren’t as fussy as bees about visiting different plant varieties, they will pollinate a multitude of different plants. One study found wasps visiting and pollinating over 600 species of different fauna. Paper wasps have even been suggested as a replacement for bumblebees.

The Radio 4 programme, ‘The Curious Cases of Rutherford and Fry’, has recently looked at the issues surrounding wasps and why we have such a pathological dislike of them. The ones we don’t like, the ones we would call anti-social, are actually the social wasps. In this country, that means the yellowjackets (or as Dr Hannah Fry calls them, “stripey jerks”). In the grand scheme of things, the time they really annoy most of us is during the picnic season and that, in the UK, is a relatively short period.

If you have a wasps’ nest, the best thing to do is call in a professional. The average wasps’ nest contains between 4,000 and 10,000 wasps. If you try to hurt a wasp, it will send out a pheromone that alerts the other wasps, who will rush to its defence. It therefore pays to remain calm and simply walk away from the problem.

To learn more about wasps, see our dedicated pest page.

To read our news article about the Autumn problem with wasps.

And now a few interesting facts. If you think we have any rights in the matter, remember the wasp has been on the planet for 250 million years and we’ve only been here c350,000 years. That means they were here a long time before we invented the picnic!

Finally, if you think wasps and hornets are large, wait until you see the Tarantula Hawk Spider Wasp! Another parasitic wasp, this one stings its prey, a tarantula, drags it back to the brood nest, lays an egg in the prey, which then hatches and eats the still-living prey.

We have considerable experience in dealing with wasps’ nests. If you think you have an issue with wasps, please contact us.

Image by Andreas Lischka from Pixabay