Hero of the hour 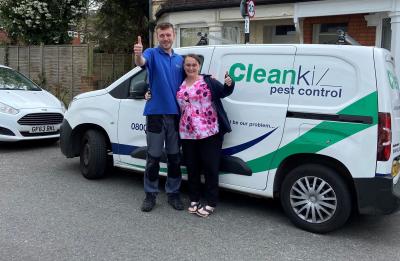 A Kenley based pest control technician has stepped in to help a distressed woman and child after they were targeted by a loose Bullmastiff.

Alex Donovan from Cleankill Pest Control was outside his office when we saw a young woman walking to school with her child and miniature dachshund. It was clear she was highly distressed and the reason for this soon became clear - a 50+ Kg Bullmastiff was charging at them.

“What could I do? What would anyone do? I sprinted across the car park and lodged myself between the woman, child and dachshund and the charging dog. By this time, it was jumping around and growling; quite intimidating when it’s an enormous dog. I eventually managed to get hold of the dog while the woman escaped.”

Once the woman and her child were safe, Alex released the dog.

“But I couldn’t just leave a loose dog running around next to a busy street, so I found a pack of out-of-date ham and lured him to the bathroom of our office and locked him in.”

With the help of fellow Cleankill employee Ruth Swain, Alex was able to find the owner of the Bullmastiff and she was soon reunited with her dog.

Alex concludes, “It was only afterwards that I heard the local primary school had been forced to call the local authorities and put out a warning to parents about the dog. It was obviously causing considerable distress. I’m just very pleased I was in the right place at the right time and could take control of the situation before the dog caused any more harm.”

Ruth adds, “Once we had the dog under control it was clear he was a bit of a sweat heart, but that certainly didn’t look the case when Alex stepped in to help. A large dog on the loose is always going to be intimidating, so I’m just pleased we were able to help.”

Bullmastiffs were originally developed in the mid-19th century to help gamekeepers protect country estates from poachers, leading to their nickname of the ‘Gamekeeper’s Night Dog’. They are a crossbreed between the tough, heavy and aggressive Bulldog and the large, strong and less aggressive Old English Mastiff.

With offices in Surrey, East Sussex, Bristol and Buckinghamshire, Cleankill has many customers throughout London, Surrey, Sussex, the Home Counties, Bristol, Gloucestershire and Somerset.

For a free survey or cost comparison go to www.cleankill.co.uk or email [email protected]