Jesus in Jeans no longer plagued by pigeons 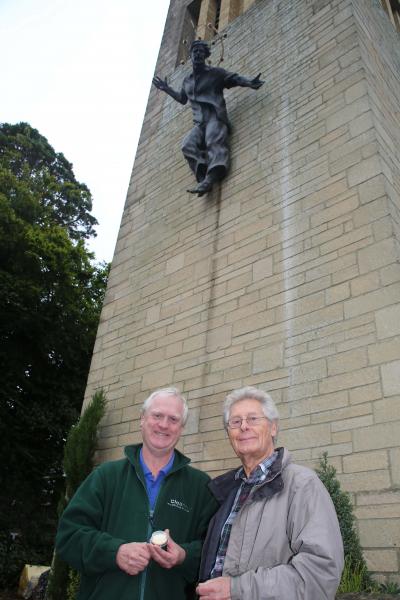 A Catholic church in Sussex had spent many years trying to prevent pigeons messing on their statue depicting modern-day Christ. The ‘Maintenance Committee’, with the help of their priest, finally found a company that could help.

Alan Duncan who, with a colleague, helps with maintenance issues at St Philips Church in Uckfield, was at the end of his tether after spending considerable funds and much research on different possible solutions to keep the statue called ‘Jesus in Jeans’ clean.

The statue hangs on the front face of the church tower above what was once a disabled access ramp. At one stage there was so much excrement on the area, from the pigeons roosting on the sculpture above, that the ramp underneath the statue became slippery and dangerous. As a result, the area was re-designed as a flower bed with conifers as an alternative access was still available.

Cleankill Pest Control, which has extensive expertise in controlling pest birds, was called in to assess the problem and came up with a solution.

Jon Whitehead, Director of Cleankill Pest Control, explains: “The sculpture has a hollow back which created a perfect home for around 20 pigeons. They would nest inside and rest on the halo creating an unsightly and unhygienic mess.”

Cleankill decided to use a special product called Bird Free Gel which they fixed to the statue at certain points, including the halo. The gel appears as flames to the birds so they are discouraged from landing.

Alan Duncan said: “We are all so pleased that Cleankill has solved the problem. We were at a loss as to what to do next. At one point we put anti-bird spikes on various resting places, painting them gold to match the halo. Unfortunately, the pigeons were ‘most comfortable’ with the additions!

“The service from Cleankill was excellent and very professional, including many after-care visits.”

The statue, by Lewes-based sculptor Marcus Cornish, resulted in controversy and interest from across the globe when it was revealed in 2009. It was unveiled by The Pope’s ambassador to this country, the papal nuncio Archbishop Faustino Sainz Munoz, and the Bishop of Arundel and Brighton blessed it.

Cleankill offers a specialist bird control service, from the initial survey and specification through to the final proofing solution. As registered waste carriers, Cleankill can carry out full-scale removal of bird fouling, as well as contaminated goods and furniture, from infested properties.

Cleankill Pest Control has the accreditations you should expect from your pest control supplier including being members of the PICS supplier scheme (Contractor ID 57321), ISO9001 and 14001, Exor, Chas, Construction Line, Achilles UVDB and Contractor Plus, Safe Contractor and Altius Assured Vendor. As an Investor in People with a Silver accreditation, all Cleankill’s staff are highly trained and offer an exceptionally fast and efficient level of service. The company is a proud member of the British Pest Control Association